"Behold! In the creation of heavens and the earth, and the alternation of night and day, there are indeed Signs for men of understanding." [Aale Imran 3:190]

Currently we do not have any integrated curriculum or textbooks for teaching science from an Islamic perspective. The use of secular texts for this purpose is far from harmless. They provide an image of the world that came into being and is working all by itself without the Creator or Sustainer. They celebrate the achievements of man instead of reflecting on the Creations of Allah and noting the extremely limited knowledge of man. They also promote conjectures or wild guesses or articles of faith (like evolution) as fact. With their facts and opinions so thoroughly mixed that it is impossible to separate them, the students are apt to be influenced by the secular beliefs without even realizing it.

Some Muslim parents and educators who have realized the problem have found themselves forced to use the Christian textbooks, like those produced by the Bob Jones University, as currently there is no alternative. We do not recommend their books, since we have not surveyed all the existing books and because teaching it without caution may be problematic in some areas. However if you have decided to use that book, here is some helpful material that will make the job of adapting it for a Muslim classroom easier.

Listed below are Qura'nic verses appropriate for major chapters that will replace the Bible verses included in a Science book for Christian schools. The chapter number reference is to the Science 5 book from Bob Jones University in the U.S. However others could use these verses in connection with any other textbook based on the subject matter.

We recommend that discussion of each chapter should be begun by having the students recite the actual verses in Arabic and then read the translation. The teacher should then explain the relevance of the verse to the subject matter. Emphasize that as Muslims we look at the universe as the creation of Allah and our study of science shows us the Signs of Allah and increases our faith. Students may be encouraged to memorize the verses with translation by giving them extra credit for this effort.

We hope Muslim Home Schoolers and Muslim School teachers will find this selection useful. If you find any errors or have suggestions for improvement, please forward to us.

"Nor are the two bodies alike, the one palatable, sweet, and pleasant to drink, and the other salt and bitter. Yet from each kind of water do you flesh and tender, and you extract ornaments to wear; and you see the Ships there in that plough the waves, that you may seek of the bounty of Allah, that you may be grateful." [Al-Fatir 35:12]

"He has let free the two seas meeting together: Between is a Barrier which they do not transgress. Then which of the favors of your lord will you deny." [Al-Rahman 55:19-21] 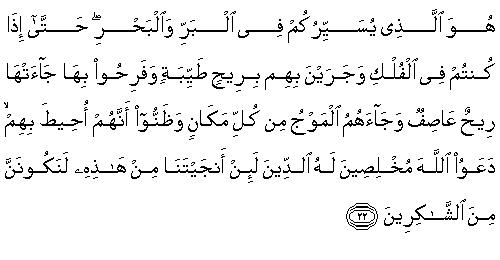 "He it is Who enables you to traverse through land and sea; till when you even board ships; - they sail with them with a favorable wind, and they rejoice thereat; then comes a stormy wind and the waves come to them from all sides, and they think they are being overwhelmed: They pray unto Allah, sincerely offering (their) duty to Him, saying "If You do deliver us from this, we shall truly show our gratitude."[Al-Yunus 10:22]

"It is He Who sends the winds like heralds of glad tidings, going before His Mercy." [Al-Araf 7:57]

"And among His signs are the ships, smooth running through the ocean, tall as mountains. If it be His will, He can still the Wind; then would they become motionless on the back of the (ocean). Verily In this are Signs for every one who patiently perseveres and is grateful." [Al-Shura 42:32-33]

"Do they not look at the birds held poised in the midst of the sky? Nothing holds them up but the power of Allah. Verily in this are signs for those who believe." [Al-Nahl 16:79]

"Do they not observe the birds above them, spreading their wings and folding them in? None can uphold them except the Most Gracious. Truly it is He Who watches over all things." [Al-Mulk 67:19]

"It is He who made the sun to be a shining glory and the moon to be a light of beauty, and measured out stages for it, that you might know the number of years and count of time. Nowise did Allah create this but in truth and righteousness. Thus does He explain His Signs in detail for those who know." [Al-Yunus 10:5]

"It's not permitted to the sun to catch up the moon nor can night outstrip the day each just swims around in its own orbit." [Al-Yasin 36:40]

"And in the earth are tracts neighboring, and gardens of vines and fields sown with corn, and palm trees-growing out of single roots or otherwise: Watered with the same water, yet some of them We make more excellent than others to eat. Behold, verily in these things there are Signs for those who understand." [Al-R'ad 13:4]

"And of everything We have created pairs, that you may reflect." [Al-Zariyat 51:49]

"And cattle he has created for you: From them you derive warmth, and numerous benefits, and of their meat you eat. And you have sense of pride and beauty in them as you drive them home in the evening, and as you lead them forth to pasture in the morning. And they carry your heavy loads to lands that you could not reach except with souls distressed: for your Lord is indeed Most Kind, Most Merciful. And He has created horses, mules, and donkeys, for you to ride and as an adornment; and He has created other things of which you have no knowledge." [Al-Nahl 16:5-8]

"He Who created Death and Life that He may try which of you is best in deed: And He is Exalted in Might, Oft-Forgiving" [Al-Mulk 67:2]